It wasn’t very big, but it was there.  We had both felt it and both knew immediately what it was.  That was late last fall.  It would take 6 months for me to finally call the doctor.  And I didn’t even call, I took the easy way out and made an appointment online through my doctors website as to not have to actually talk about it out loud yet.  There were days that I would honestly forget that it was even there, I would lose myself in Mark, the kids and Elizabeth’s growing needs for me.  Those forgotten days didn’t last long as I would lock myself in a bathroom somewhere in the house and place my fingers along the ridges of it.  Tears would immediately fill my eyes and I would fall to my knees begging God to just make it go away.

Okay admittedly I can completely freak myself out about anything medical.  My family and friends do not get this side of who I am because of the years and years of taking care of Elizabeth’s extreme and incredibly invasive medical needs.  I can just about handle anything with her; seizures, check no problem.  Major surgeries with open incisions 24 inches long, okay got that covered.  More medications in a day than most people take in a lifetime, dozens of doctor appointments in a months time, weekly blood draws … it’s something I just do, get done and rarely blink an eye at.  But when it comes to my own health I just can’t stomach it.  So the recommended monthly self breast exams were never a part of my routine.  Finding this was really all by accident and over the next few months as I tried to forget about it Mark was there to remind me and what was going to happen if I did not get this taken care of.  You would think that would have been enough to scare me into making that phone call but it really didn’t.  Mark would threaten to call the doctor himself, or even worse call my parents.  I mean seriously I am 48 years and my husband is tattling on me!  To buy myself a little time I told my mom about it and even she eased my mind about it being maybe scar tissue or just a cyst but I still needed to have it checked.  Telling my mom meant Mark would be satisfied and I had bought myself a little more time. But then it began to hurt and I knew it was growing; the ridges were changing and what was once this little round lump was turning into an oddly shaped mutation invading my body.  Googled symptoms all seemed to point to the already very obvious and the fear of my stubbornness over the last few months began to set in.

Mark drove me to the doctor, it would be one of the last appointments he would be a part of although we did not know it at the time.  There was something happening in our world that would change the course of medical care in the upcoming weeks.  We talked about kids, the ones she had delivered and how was Mark, family and Elizabeth.  It would take 30 minutes and a phone call to schedule a Mammogram for 2:00 that afternoon, which I immediately rescheduled when I walked out of her office because I wasn’t ready for what I had already known for months.  It was just a matter of days and I was back at the clinic.  My friend, Nikki had driven me and Mark was on shift at the station.  I sent selfies to Mark in the awful gowns they had laid out for me and pictures to Nikki on the much needed to be replaced robes that hung on the back of the door with a note saying I am NOT wearing this. 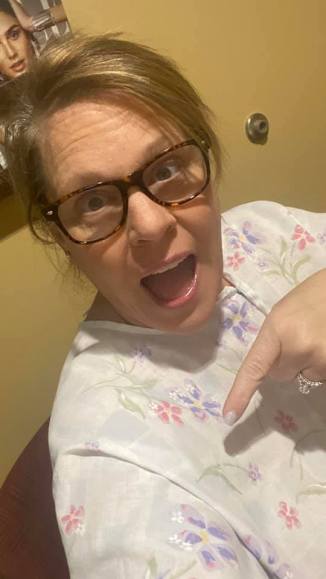 I was escorted to a room by a woman who spent the next 45 minutes pushing and pulling on me in ways I did not even know boobs could move!  At one point I couldn’t find the lump for her and said it’s gone, I seriously can’t find it; don’t worry she found it for me.  So let me stop here and say this … I have seen enough episodes of Grey’s Anatomy to know that when they tell you to not get dressed and wait here, well it’s usually not good.  From the Mammogram I went to the Ultra Sound room and was measured, marked and made to be part of conversation that I knew was to keep me from thinking the worst.  She took a ruler measured once, measured twice and then a third time and was told don’t get dressed wait here.  Twice in one day and I then knew it was cancer.  A doctor came in, took the same ruler and measured, marked me up and measured some more.  I looked at the screen and didn’t even know what to look for.  With Elizabeth I always look at her scans before they are even finished and I know what I am seeing.  I sat up on the end of the bed and she started to talk.  I can’t even tell you what she said, I have replayed that moment over and over again in my head and I still have no idea what she said to me.  For just the briefest moment I felt that familiar sting that I knew all too well and just as I had years ago when I saw Elizabeth for the first time I would not let the tears fall.

I was scheduled for a biopsy later that day, does it usually move this fast and can I reschedule again??  My friend, Nikki was still in the waiting room and I wanted Mark.  I made it out of the office and into the hallway before I finally let the tears fall.  It was brief, I was determined to hold it together.  I mean if you follow our story you do know by now that I am pretty stubborn and if you think a cancer diagnosis was going to be what broke me, think again my friends, think again.  I really wanted to see Mark and tell him in person so Nikki drove me to the station.  I called my mom and told her the news, asked her to tell my dad as I just couldn’t.  Nikki drove and I cried and then we would laugh about something and then I would cry some more.  It was quiet for a few minutes and Nikki said you know God’s just not ready for you yet and we exploded with laughter.  If you’re going in to get a possible cancer diagnosis seriously take your funny friend with you it makes all the difference! I made it to Mark, but I think we both had expected this and so it didn’t seem quite so shocking to either one of us when I said it out loud to him.  Or maybe Mark is just really good at dealing with this kind of stuff and instead of letting us lose ourselves in an emotional whirlwind he just went into okay time to get down to business and beat this mode and off I went in Nikki’s car again where it was decided a bagel sounded good and we laughed some more.

Mark took me to the biopsy that afternoon and it was confirmed what both the mammogram and ultra sound showed.  It was an aggressive cancer, the lump was well over 2.5cm but the silver lining was that it was in the milk duct, one of the most common types of breast cancer and by far the most researched with a good prognosis provided it had not spread to the lymph nodes.  Within minutes an entire plan of action had been set into motion.  A surgeon had been called, an Oncologist was chosen and an MRI scheduled for the following week.  All of this was the easy part; I had to tell the kids and suddenly my very worst nightmare was coming true.  Caroline and Alex are strong, independent and good kids.  It would be hard to hear but they would ask their question, cry when needed and emerge from this better for having gone through it.  But then there was Elizabeth.  She would never understand the diagnosis or what was happening.  What happens when the caregiver becomes ill?  What happens to kids like Elizabeth whose mom has done everything for them for their entire lives and can no longer take care of them?   Surviving cancer was no longer an option for me but now for Elizabeth.  The thought of what could happen to her without me could not be forgotten like the lump had been.  It was time to fight, time to build a team that understood our unique family needs and would not settle for anything but the very best as we moved forward with next steps.  Our plan was made but quickly halted by something very much out of our control and would prove to test our medical system and how you move forward when time is not on your side.